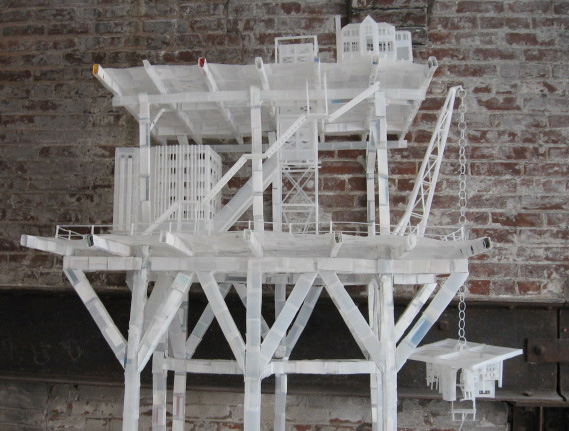 “It is not a man’s duty, as a matter of course, to devote himself to the eradication of any, even the most enormous wrong; he may still properly have other concerns to engage him; but it is his duty, at least to wash his hands of it, and if he gives it no thought longer, not to give it practically his support. If I devote myself to other pursuits and contemplations, I must first see, at least, that I do not pursue them sitting upon another man’s shoulders. I must get off him first, that he may pursue his contemplations too.”
-Henry David Thoreau, Civil Disobedience

“Phantom Limb”, a new work by Ellen Driscoll with Golnar Adili and Aimee Burg, is a landscape made from hundreds of plastic milk and water cartons harvested from recycling bins and bags. At its heart is an abandoned North Sea oil rig which houses a McMansion, a surveillance tower, and other architectures of power and consumption attached to it like mollusks to a rock. From the main platform of the oil rig, a dredging crane pulls up an empty load from the ocean below, the underside of which is encrusted with a small colony of shot gun houses. Using the translucent plastic as a medium signifying ghostly presence, fluidity, and transformation, “Phantom Limb” speaks to the complexity of relationships engendered by simple acts of consumption and waste–the clean milk or water, that comes in a plastic bottle, that ends up as waste on a street, then on a garbage barge, plying the waters for a developing world site ready for a cash exchange. It is there, that we find ourselves “sitting upon another man’s shoulders”. 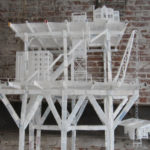 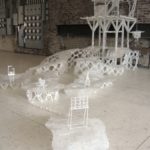 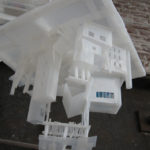 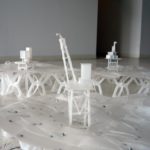 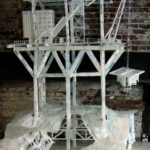 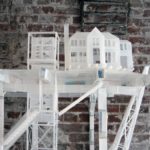