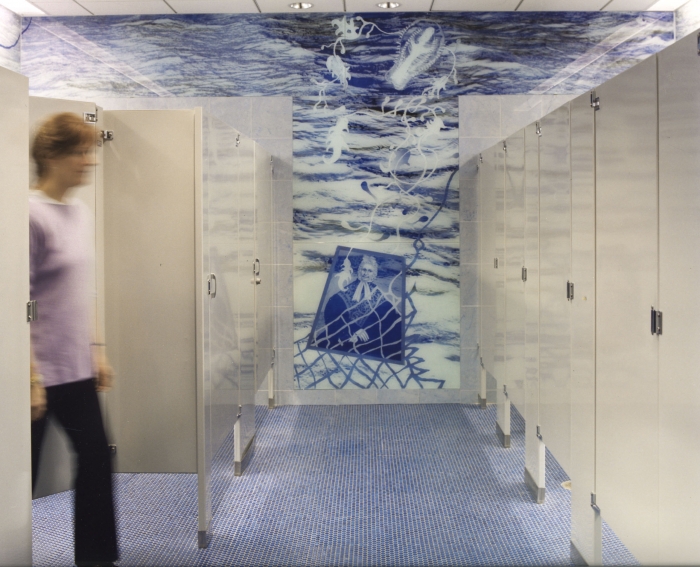 A Women’s Restroom for the Smith College Museum of Art

The women’s room is submerged in a band of translucent glass panels, lapping with painted and etched waves. The sinks are cobalt – in one a fishing net appears to be unravelled down the drain; another has a fishook and lure splayed across the bottom. Driscoll has transposed images of women from the museum’s collection onto glass. The largest two – a primitive portrait of a New England dowager and Corot’s “Maid of Gascony” – face off across the space. From “The Art of Toiletry” by Katherine Bowers, Women’s Wear Daily, 4/22/2003 Driscoll’s installation for the women’s room.. is swathed in a rich cobalt blue that makes you feel as if you’re floating in a warm bath. ‘Water is integral to bathrooms,’ Driscoll said, ‘but nobody ever thinks about it, where it comes from and where it goes, so I wanted to give a sense of being in a watery world beyond the walls.’ She designed a horizontal band of glass panels.. on which are sandblasted original drawings of underwater sea life. Around the room – on the walls, in the sinks, in the toilets – are painted images of fishing nets, hook, and various flora and fauna relating to the sea. She incorporated four images of women that she culled from the museum’s collection, including a ship’s figurehead and the Augustus Saint-Gaudens portrait Diana of the Tower. The idea, Driscoll says, was to play with the concept of ‘private space, public art, of giving the sense of being alone while not being alone.’ From “Flush with Art” by John MacMillan, Smith Alumnae Quarterly, Spring 2003 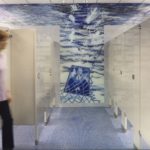 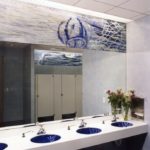 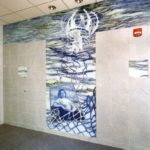 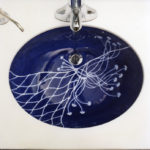 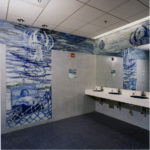