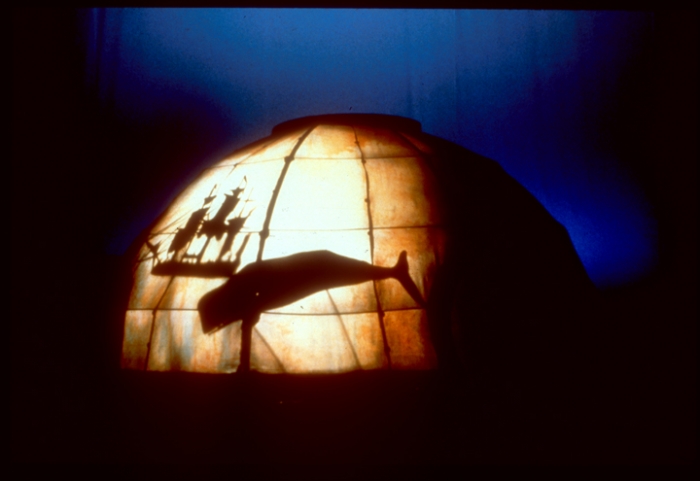 This project combines a personal story and a historical narrative. The personal story is an exploration of my father’s physical condition living for 18 years with paralysis of half of his body after suffering a stroke at age 53. I became fascinated with Herman Melville’s description of the whale’s body when I read Moby Dick the summer after my father died . “…the peculiar position of the whale’s eyes, effectually divided as they are by many cubic feet of solid head, …must wholly separate the impressions which each independent organ imparts… How is it, then, with the whale? …is his brain so much more comprehensive, combining, and subtle than man’s that he can at the same moment of time attentively examine two distinct prospects, one on one side of him, and the other in an exactly opposite direction?” This condition of living with split vision/split body is the condition that the surrogate persona of Ahab’s Wife explores in the theater piece, as well as her own relationship with the whale/man. The interactive objects created include two swifts, modeled on the yarn-winding instruments that whalemen used to create out of whalebone, and here used as dissonant searchlights or eyes, the hoop skirt/landscape which doubles as the eye of the whale, fans which are used as skirts, sails, and underwater flora and fauna, and a diving bell used for shadow play 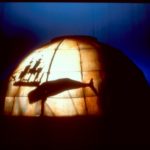 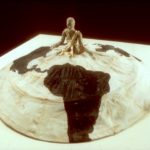 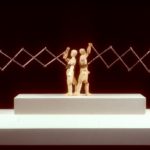 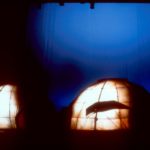 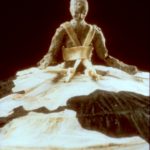 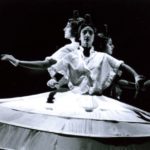 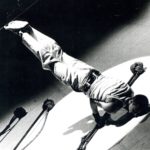