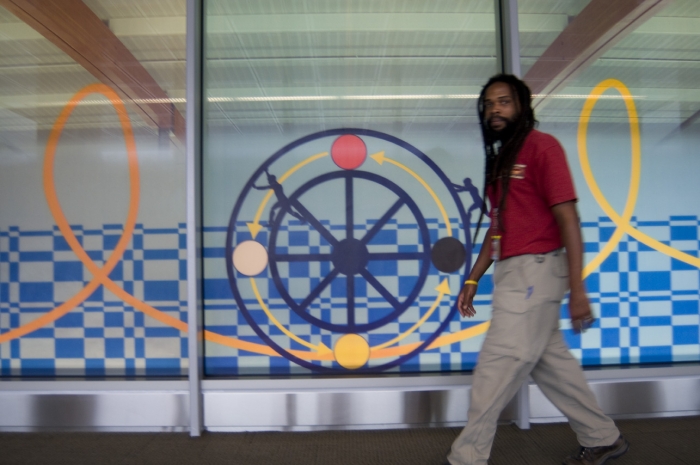 An 800 foot long suite of 165 continuous glass windows greets international passengers as they arrive in Raleigh Durham, the area known as the “Research Triangle”. The design combines large gestures, meant to capture the speed of a gaze caught at the pace of a fast walk, as well as more detailed visual information which will reward those who travel repeatedly in the corridor. The larger gestures are based on 19th century experiments recording the motion of bird and insect wings, as well as images of the DNA helix to which the motion studies bear a startling resemblance. A horizontal band below these gestures represents an extended weaving pattern called a basket weave which forms a continuous horizon line. The visual sequence includes others who have arrived— from the first settlers sent by Queen Elizabeth, greeted by the indigenous Roanoke, to African slaves, to Cambodian and Vietnamese immigrants of recent years. As passengers traverse the long hallway, they are kept company in the visual transition from air to land by these others who have arrived before them. Then midway, a scale shift occurs as we enter the section patterned by the motion of insect wings. Here there are gardens of local flora and fauna which loom larger than the occasional running, jumping, and flying figures hidden in the garden imagery. Birds, insects, worms, and butterflies populate this garden section. In the final section the butterflies become inkblots, similar to Rorschach tests, and fly in and out of DNA helixes. This shift to the interior of both the psyche and the body, signifies the final arrival to the “Research Triangle”, famous for both scientific and humanities research. The material is laminated glass fabricated by Westphal in Germany. (all photos are by Brady Lambert) 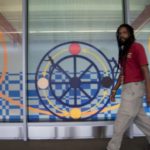 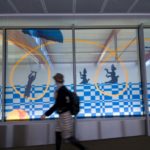 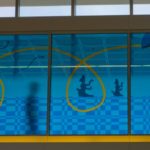 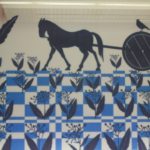 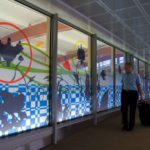 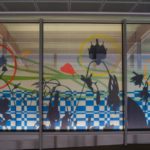 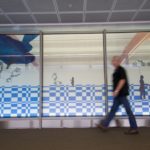 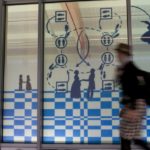 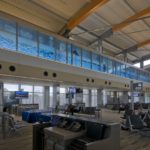 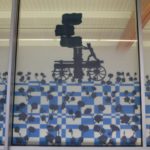 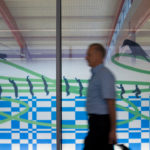