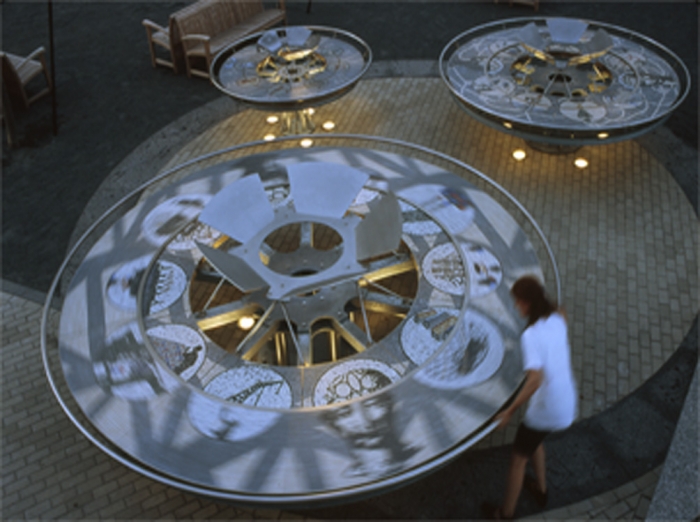 Aqueous Humour is a sculpture based on the wheels that drive the cranes in Conley Terminal in Boston. In each of the three wheels are mosaic images of the marine life in the harbor waters, the shipping industry operating at Conley Terminal, and the fishing industry across the street at the Fish Pier. The mosaic images are both historical and contemporary, and refer to the many people who arrived in Boston from other countries, and whose labor built the busy port that thrives today. On the ground plane, a large granite circle is engraved with the navigational stars used by sailors to chart their course in the ocean. Long before the invention of print, an art of memory was invented by the Greeks. This was then developed by the Romans and was practiced later in Europe. As Frances Yates writes in The Art of Memory ” This art seeks to memorize through a technique of impressing ‘places’ and ‘images’ on memory.. in the ages before printing, a trained memory was vitally important; and the manipulation of images in memory must always to some extent involve the psyche as a whole.” Historically, those trying to practice the art of memory, would store information in a mental image of choice. For example, one might imagine the doorway to a house, and store the information of the extended genealogy of the family living within. When that particular image was conjured, the stored information would be released – like an ancient Palm Pilot. The three wheels in “Aqueous Humour”, two of which spin under human power, are based on these early visual mnemonic systems developed by Raymond Lull, Giordano Bruno and others. In this contemporary version, we remember the history of the port, and honor those who make it a vital place today. Ellen Driscoll in collaboration with MAKE; Charles Jones, Paul Meneses, and Matthew Hincman – a kinetic sculpture for the new South Boston Maritime Park. Mosaic Fabrication: Franz Mayer of Munich. 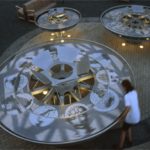 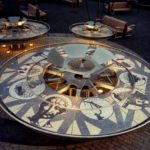 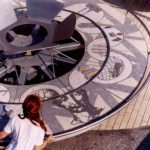 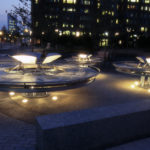 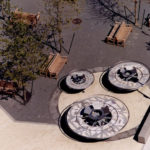