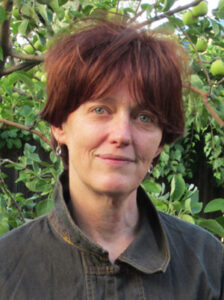 Ellen Driscoll’s work encompasses sculpture, drawing, and public art. Recent public installations include “CartOURgraphy” for Middle College High School and the International High School in Queens, “Night to Day, Here and Away” for the Sarasota National Cemetery, and “Bower” with Joyce Hwang and Matt Hume at Artpark commissioned by Mary MIss’s City as Living Laboratory. Earlier works include “The Loophole of Retreat” at the Whitney Museum at Phillip Morris, and “As Above, So Below” for Grand Central Terminal. Her awards include fellowships from the Guggenheim Foundation, the National Endowment for the Arts, the Bunting Institute, the New York Foundation for the Arts, the Massachusetts Council on the Arts, the LEF Foundation, the Rhode Island Foundation, Anonymous Was a Woman, and a Fine Arts Award from the American Academy of Arts and Letters. Her work is in major collections including the Metropolitan Museum of Art, and the Whitney Museum of Art. She is Program Director of Studio Arts and Visiting Professor of Sculpture at Bard College. She has been awarded the Outstanding Educator of the Year award for 2018 from the International Sculpture Center.